Kuro the Artist
Alex Gautreaux (pre Chapter 8)
Hurshie Lee
Ryan Asher
5 Years Later is a crossover continuation of the television shows Danny Phantom (Created by Butch Hartman and owned by Nickelodeon) and the Original Ben 10 Saga (Created by Man of Action and owned by Cartoon Network).

It is meant to do justice to the respective franchises as they were mistreated by their network towards the end of their run despite the incredible amount of potential the shows have.

Starting with Chapter 3, the Invader Zim franchise joined the 5YL roster as the third show integrated into the crossover.

The comic's story shall officially conclude with the release of Chapter 14.

A cross-dimensional accident forces ghost-fighting superhero Danny Phantom out of a five-year retirement when his old arch-nemesis, Vlad Plasmius, allies himself with Eon, a time-walker on an endless crusade across the multiverse.

With the help of the alien shape-shifting space cop, Ben 10, the Heroes must find a way to stop this mastermind. In a story of Morality vs Power, 5 Years Later brings together universes for an epic conclusion that takes them to the next level.[1]

Back in early 2015, Kuro had done drawing requests free-of-charge on Facebook for publicity. One request was a picture of Ben Tennyson using Ghostfreak to fight Danny Phantom. After its completion, Kuro became fascinated with the idea of Ben and Danny fighting together and began to draw versions of them in a multitude of art styles over the course of 2015.

The more elaborate the illustrations became, the more a story began to develop. Originally, it was scripted as a short, five-chapter comic book. It took place shortly after each series ended, Eon was not involved, and there was little effort to distinguish it from regular fan-fiction. It was around that time that Butch Hartman's first Danny Phantom: 10 Years Later YouTube video was released. This inspired Kuro to develop the story further, and add a significant time-skip to give plenty of room to expand the universes more. 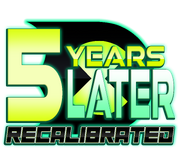 5YL:R is an ongoing event. It is not a Remaster, New Addition, or Special Version. We are currently in the “5YL:R Era”. The event highlights the transition between the original uploads of 5YL, and the new ones. The New 5YL Uploads are meant to replace the originals as the official versions of the story.

So, from this point forward, the new version is 5YL, and will simply be known as such. The old one will be 5YL: Archaic, or 5YL:A.

The updates will include cleaned-up versions of the original art. There will also be some scenes completely redrawn, be it I didn’t have access to the original file, or it simply looked too poor to be clean-up and needed a full redraw in order to fit with the other improvements. There will also be extended pages to help the narrative, but this will not be a priority. The Ink Tank will not be adding scenes simply for the sake of adding scenes.

From there, we will be dubbing the scenes with the Motion Comic Cast, which you can check out previews of below.[2]