Acidgrime with a host body, is a humanoid being covered with a sea-foam green colored algae. He wears a green suit with four black spots, along with two white and one black stripe on the waist of his uniform and silver sleeves. He has one big and two smaller acid sacks (which are actually bulbous organs) on his forearms, with two acid sacks on his shoulders.

In his skinless form, Acidgrime is lacking his algae and just consists of brown porous organs that produces the algae, with the bulbous organs connected to his body by root-like veins. 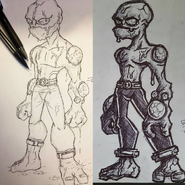 The Xolbrine are a species that evolved from the various pond scum of the planet into sentient flora. They reside in the swamps and bogs of Methanos, feeding on the native fauna found on the planet by turning their prey into a pure liquid form of a chemical compound known as Ziellphyll for them to digest.