"Whoever said that man cannot create God has never paid a visit to this doctor!"
―Aloysius Animo[src]

Doctor Aloysius James Animo, commonly referred to as Dr. Animo, was a villain in 5 Years Later. He first appeared in Chapter 4: The Fallen Gods. He is a Human from the planet Earth in the Ben 10 Universe. He is an old enemy of Ben Tennyson.

Dr. Animo has pale green skin, white hair, and sharp teeth. He wears a purple and black suit with machinery, he wears a helm the covers the top of his head.

After the loss of his arms and legs, he developed a cybernetic system that allows him to replace his lost limbs with organic animal and extraterrestrial body parts. 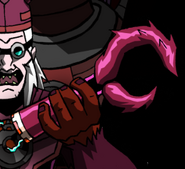 Dr. Animo can be seen as a stereotypically insane and mad scientist. He is brilliant, yet antisocial, often preferring to be around animals rather than humans. He used to have a habit of making animal plushies and talking to them as if they were living beings. Over time, he has gotten more and more unhinged due to his constant failures.