This page contains commissioned Alternative Omnitrix users that exist in their own respective universe. They are not present in the main story of 5 Years Later.

Jennifer Kendra "Jen" Tennyson is an alternative Omnitrix wielder who wields an Ultimatrix, allowing her to not only transform into various alien species, but also allows her to evolve them into their ultimate form.  She's rather arrogant and as a result, her universe's Azmuth never deemed her worthy of the final version of the Omnitrix.

Like Ben with Feedback, she had an unhealthy obsession with her transformation Solarstorm.  At a younger age compared to most Ben's in the known multiverse, Jen unlocked Clockwork, causing Eon to avoid her believing she's more trouble than she's worth - in an accident relating to Clockwork, Jen accidentally sent her universe's Charmcaster six years into the future. 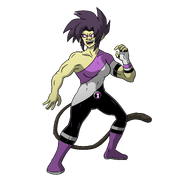 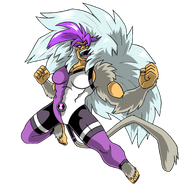 Super MonKi
Add a photo to this gallery

Kidd Blaster is a former deadbeat bounty hunter who spent his days orbiting Earth and pirating cowboy movies from them when the Omnitrix caused him to crash land on Earth. After his partner in crime, Rad-Is (A Galvanic Mechamorph), hacked the watch to remove the DNA lock, Kidd decided to make the most of his situation and become an Earth hero.

Kidd wields a Prototype Omnitrix, which is heavily damaged as a result of Rad-Is' hacking attempt. As a result, the DNA samples were scrambled. This resulted in Kidd possessing only nine transformations, all of which, Ben never acquired. In addition to the Omnitrix, he utilizes Sundance, a rapid-fire laser pistol, Butch, a stun baton that generates an electric charge upon contact with an enemy, and wears a durable armor that allows him to survive in almost any atmosphere.

Jason Nyathi "Kia" Thirteen, is an alternative Omnitrix wielder who obtained a much-improved version of his universes Omnitrix after a misfire by Azmuth that landed outside Jason's house. Intended for his universes Ben Tennyson, Azmuth sent Ben to take back the Omnitrix and despite defeating Jason, saw potential in him, giving Jason access to thirteen transformations and calling him "Jason 13" due to his age. By age 17, he has access to about five hundred thousand transformations and the ability to instantly switch through transformations with no timeout, although he still does not have complete access to Master Control.

Jason is incredibly cheerful, not having to go through much trauma in life despite his powers. This however can lead to him underestimating his opponents, but he generally knows when to get serious. He is a natural leader, quickly moving up the ranks of his universes Plumbers and becoming a Magister at the stunning age of 18.

Azmuth heavily disagrees with Jason wielding the Omnitrix, but trusts Ben enough to keep Jason under his wing.

Khan found his Omnitrix around the age of 14 on a beach in Australia in 1951. He started naming his aliens early on when his sister called his first alien Boombox and this has stuck as a tradition ever since.

At the age of 18, he had the Omnitrix removed by the Plumbers so he could join the army. He left after five years and joined the police force for two years before the Plumbers came to him and asked him to put the Omnitrix back on. He reluctantly did so and began working for them as a special detective.

His creator has remarked that Khan hates anything to do with Tennyson's from other timelines.

The vast majority of Khan's transformations are name as references to pre-2000s pop culture. He is inspired by Constantine from DC, James Bond, Rorschach from Watchmen, and Eliot Stabler from Law&Order.

Ben 10finity is a composite version of Ben Tennyson created by Kuro the Artist.

Aside from his Master Control Transformations, he utilizes the Ultimatrix and the Biomnitrix, allowing him to evolve and fuse his transformations. The Sword of Ascalon gives him additional reality-alteration powers, and Skurd can surrogate another transformation's powers. While his Ultra Ben visor is just for looks, the Potis Altiare multiples all of his powers even further. He also retains his ability to use magic.

Retrieved from "https://5yl.fandom.com/wiki/Alternative_Omnitrix_Wielders?oldid=16400"
Community content is available under CC-BY-SA unless otherwise noted.