Antigravitesla is the Omnitrix's DNA sample of an unknown species from an unknown planet in 5 Years Later.

Antigravitesla bears some resemblance to Nikola Tesla, except for his light teal skin, pointed ears and blue orbs located all around his body. He wears a black, green and white jumpsuit. 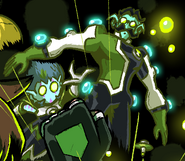