Armodrillo is the Omnitrix's DNA sample of a Talpaedan from the planet Terraexcava in the Andromeda Galaxy, in 5 Years Later.

Armodrillo is an armadillo-like humanoid with what looks to be yellow plates of armor on his shoulders, forearms, legs, back, head, and tail. His skin is light gray, and his eyes are green. He wears a black shirt with a large green stripe. He wears fingerless gloves of the same colors and has a sharp claw on each of his fingers and toes. His armor is attached to him by what looks like bolts, and he has jackhammer parts for elbows. 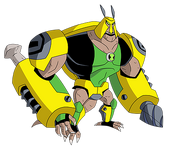 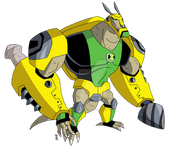 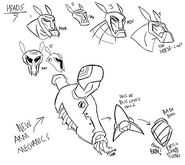