The Plumbers
The Orion Squad

Benjamin Kirby "Ben" Tennyson also known as Ben 10 is a main character in 5 Years Later. He first appeared in Chapter 1: Alienated. He is a Human originating from the planet Earth in the Ben 10 Universe.

Originally a normal ten-year-old kid from Bellwood, Ben stumbled upon the Omnitrix, a powerful watch-like device that allowed him to transform into numerous amounts of aliens. Utilizing this, he became a famous superhero on Earth and beyond, saving the Universe on various occasions.

Ben Tennyson is a Caucasian human with brown, unkempt hair, and lime-green eyes. He is very lean and somewhat underdeveloped due to the majority of his adult life handling situations in alien form. Recently, Ben grew a goatee beard. He also has a scar on his right pec. 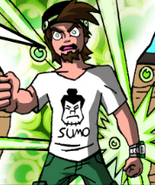 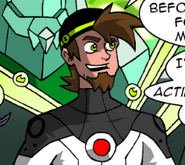 Ben is confident, comedic, and an incredible strategist. When he was younger, he was much less serious, cocky, and a shoot-first-ask-questions-later type of guy.

His ability to lead has noticeably developed, so much so that his Grandpa Max has consigned him with the responsibility of mentoring five new Plumber recruits, including Lula. He is shown to be very resourceful, making the most with what he is given in any situation.

He cares for others more than himself and has even given up his own life to save another on multiple occasions. During fights, he always prioritizes keeping civilians in the area safe. He is willing to help anyone in need and see to it that they are able to solve any problems that they might have in the future.

Ben was a normal 10-year-old boy, but that all changed when at the start of his summer trip with his grandfather Max and cousin Gwen, Ben discovered an alien device called the Omnitrix. This was later revealed to have happened because the Omnitrix was locked on to Max's DNA, however, Ben's own DNA was close enough to Max's, that it allowed the device to attach itself upon the boy's wrist. On that same night, Ben fought his first battle against one of Vilgax's drones and won. However, when all was said and done, Ben couldn't sleep as the events that happened that day were all piling up in his mind. His grandfather confronted him, and that talk made Ben remind himself if he ever felt unsure about himself or his choice to be a hero, that it was always time to be a hero, hence where his hero cry comes into play, "it's Hero Time."

It was during this summer Ben first meets his first rival, later friend and teammate, Kevin Levin. The 11-year-old boy ended up absorbing some of Ben's Omnitrix DNA, causing a major mutation and turning him into Kevin 11.

During his trip, he would encounter one of the most feared and dangerous beings in the galaxy, Vilgax, who wanted to use the Omnitrix to create an unstoppable army for conquest. It was during their first battle that Max revealed the truth of his past, and Ben manages to defeat Vilgax for the first time.

Ben is now a teenager at the age of 15, living a normal life without the Omnitrix. However, when Max goes missing, Ben reequips the Omnitrix. The Omnitrix soon recalibrates itself after being off for several years, locking away all of Ben's old transformations, while giving him 10 new ones in their place. Ben and his cousin Gwen, now more skilled with magic, meet up with Kevin Levin during a weapons deal with the Forever Knights, DNAliens, and himself. After the conflict, and the death of Magister Labrid, the three decide to work together and fend off against the Highbreed invasion.

Aggregor, an evil Osmosian set on gaining limitless power, collects all pieces of The Map of Infinity to travel to the Forge of Creation (Birthplace of Celestialsapiens) to obtain their great power. In order to prevent him from absorbing a baby Celestialsapien, Kevin absorbs Ben's Omnitrix and becomes a fusion of all of Ben's current transformations. Although Kevin successfully defeats Aggregor, the immense power causes him to lose his sanity, turning him into a highly dangerous villain set on taking revenge on those who wronged him in the past. In order to stop him, Ben and Gwen get into a moral debate on whether or not they should save Kevin, or kill him before he hurts anyone else. After Gwen attempts to save him but fails, Ben and Kevin face off in a final battle, which results in Kevin being restored back to normal.

As an evil Chronosapien named Maltruant was gathering pieces of himself scattered in time and space, Ben from different points of time was forced to fight against him and his servants. During their final encounter, Ben used the power of all his transformations to contain the Big Bang created by the Annihilaarg and defeated Maltruant.

In And Beyond Episode 5: Krypton and Vegeta, During his road trip across space at age 16, Ben and the rest of the team, traveled to the planet Vegeta. There, Ben acquired the DNA for MonKi from Tomma.

On his 18th birthday, Ben was deemed worthy by Azmuth and received the Master Control, which unlocked every single DNA Sample in the Omnitrix, along with other features. Over the following days, weeks, months, and years Ben discovered many new transformations that he still uses to this day. He used Slampeed for the first time within days of getting Master Control, Slingshot one year later, and UltraViolent two years later.

Ben had an encounter with someone named Dr. Logic when he was 19 years old. Dr. Logic disagreed heavily with the way Ben handled using his Omnitrix. Blinded by his goal to "fine-tune humanity", Dr. Logic eventually forced Ben into a scenario with an impossible morally-correct choice, challenging everything Ben stood for as a hero. All evidence of the event was wiped from Plumber Archives, and Ben has not talked about him since. The event changed Ben's ways of how he used the Omnitrix from that point forward.

When he is not busy saving the world, Ben teaches his own recruits (namely The Orion Squad) at the Plumbers' Academy.

In The Message, while battling Psyphon as Mantabolt, Ben contacts Blukic and Driba about a problem with his messaging system. After the battle, Ben contacts them again to see if they found a solution, only for them to realize that he simply forgot to unmute his messages.

The 5 Years Later wiki has a collection of images and media related to Ben Tennyson.
Community content is available under CC-BY-SA unless otherwise noted.
Advertisement