5 Years later Wiki
Register
Don't have an account?
Sign In
Advertisement
in: Under Development, Ben 10 Universe, Transformations,
and 5 more

Big Ben is the EVO fusion of multiple alien species in 5 Years Later.

Big Ben is a colossal amalgamation that stands in an upright posture. His face has 4 eyes and 2 head plates that separate to reveal a massive pink brain. His lower jaw splits in half to reveal a green interior with a set of sharp teeth on both sides. A tail extends off Big Ben's head.

His shoulders are green, each one housing a large mouth with blunt teeth. The torso of Big Ben is composed of a blueish gray slime with Xolbrine organs and a Galvan arm with an eye on it. The right arm of Big Ben resembles a skinless Ectonurite's with bone spikes jutting from the elbow.

The Modified Omnitrix Symbol is on his chest, with Technus' face on the emblem. 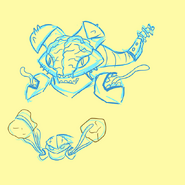