Big Chill is the Omnitrix's DNA sample of a Necrofriggian from the planet Kylmyss in 5 Years Later.

Big Chill is a blue and black insect humanoid alien with navy-blue wings, green eyes, and dark blue fur on the top of his shoulders to the bottom of his thighs. Big Chill has light blue spots on his forelimbs, antennas, claws, and head. 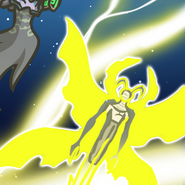