Bloodbite resembles a mix between an insect and a wolf. He has an orange exoskeleton and red fur. He has four eyes, with one set of two being larger than the other, and two orange antennae with two bat-like ears. He has two mandibles surrounding his jaws, along with brown teeth. He has four arms with his exoskeleton covering his wrists, while the rest is fur. He wears a green, black, and white uniform from his stomach down to his feet. He has several ports on his body where he can expel blood. One in the center of his forehead, one on each wrist, and a few located on his back. 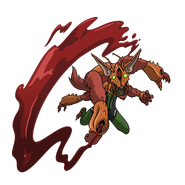 There are numerous subspecies of Lycanights. This one, in particular, are known locally as “Fleets”. They live in harmony with the natural predator of the Cravians, the Nazathids. They serve as caretakers or guardians to the gargantuan creatures, some even help them hunt.

In exchange for their services, the Lycanights are not only allowed to live on the Nazathid, but also may periodically drink and absorb their blood. Due to this practice, these Fleets are usually in small numbers, with each Fleet normally possessing one to two families.