Bloxx is the Omnitrix's DNA sample of a Segmentasapien from the planet Polyominus in 5 Years Later.

Bloxx is a tall alien that resembles a gorilla. His hands, shoulders, and feet are blue, and he has hexagonal holes on his arms and legs that secrete a concrete-like material. His arms, legs, and back are red. His jaw and head crest are white, while his eyes are green with black markings. He also has three white cube shapes on his chest.

The Omnitrix symbol is located on his chin. 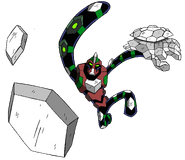