Kuro the Artist
Catabones is the Omnitrix's DNA Sample of a Calcimarrian from the planet Golku V in the Andromeda Galaxy in 5 Years Later.

Catabones body is composed of a gas trapped in his cloak. However, the gas solidifies into his six hands and three green eyes. The entire cloak is black and white with green accents.

The Omnitrix symbol is located beneath his 3 eyes under his hood. 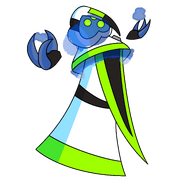 The planet of Golku VIII is the equivalent of a graveyard, with a foggy atmosphere, stone henges, and little to no other life other than the Calcimarrowians. They were born from the planet itself, with them starting as gas trapped underground. After a long period of time they come out of the ground in their gas state and over time develop hands, a floating pair of eyes, and eventually wear a cloak by the age of 1. Their cruel society favors more powerful beings that are capable of creating armies, rather than general knowledge that can help out on war tactics and help their poverty ridden cities.

However, one day, Golkusian Hounds started to become more dominant on the planet and slowly killed off most of the Calcimarrowians, making the species endangered, despite their more powerful abilities. That is because the species has an element of surprise approach when killing prey.