Grum'ky, or Chirp, is a hero in 5 Years Later. He first appeared in Chapter 2: The Lonely Ghost.

Chirp has a humanoid body with insect-like qualities. He has grayish-blue hair, light blue eyes, and antennae on his forehand and cheeks. His body is covered with a pale-green exoskeleton. When not in his Plumber suit, he usually wears a casual shirt and jeans. 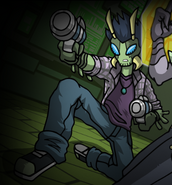 Chirp is mute. He exclusively communicates to Eve with his native language, which cannot be interpreted by Universal Translators. He is very shy and timid.

His real name, Grum'ky, is impossible to pronounce by those not native to his species, as it involves making different timed and pitched chirping sounds by special vibrational chords. He goes by the name “Chirp” as he does not talk, and only makes small, reactionary chirping sounds.