Chromastone is the Omnitrix's DNA sample of a Crystalsapien from the planet Petropia in 5 Years Later.

Chromastone is a purple crystalized humanoid with magenta crystals on his forehead, arms, and back. He has red, blue, and green crystals protruding from his shoulders and wrists. Chromastone wears green, black, and white leggings, as well as a green and white neckguard, along with a black and green upper uniform on the lower section of his shoulders and the sides of his upper chest.

The Omnitrix symbol is located on his neck guard. 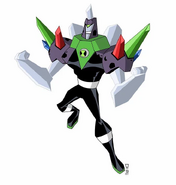