In his Human Form, Danny is Caucasian with black hair and blue eyes. He has a lean athletic build. He frequently wears warm colors and casual clothing.

In his Ghost Form, Danny's hair glows snow-white, becoming much longer and prone to movement. His eyes glow green and his irises disappear. His skin also becomes slightly darker. He wears a black jumpsuit with a white collar, gloves, and boots, and sports his logo across his chest. His belt can be transformed into various utilities.

When Budding, Danny's hair can ignite into flames, and his logo glows green. His eyes also engulf entirely in a green glow.

Danny begins to experience an Awakening with his Ghost Form, giving him greenish-blue skin and long, pointed ears. His teeth now have fangs, while his hands start growing claws. His hair is now permanently ignited in white flames, and his eyes lose his pupils entirely, and begin to bulge as the skin around them turn black. His suit is almost much brighter and tinted blue.

After pushing his Awakening form further to Stage II, his suit transforms into a sleeker design, with longer boots and gloves, and switched to a greenish-blue color. His hairline and eyebrows change shape, as well, and all of his teeth turn sharp.

After absorbing dark matter and afflicted by past events, Danny becomes enraged and transforms into Phantom Fury. In this form, Danny's body appears white with his midsection and feet a bright red. His eyebrows and eyes glow red, with his ears and feet taking on more bat-like characteristics. His hair is engulfed in a light red flame. 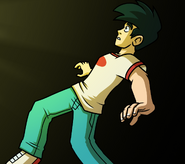 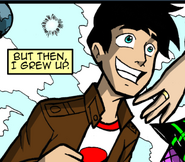 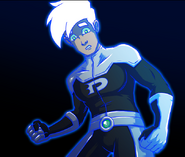 "Ben, you don't get it. I can't..."
"Can't what? Fight? You've survived this long and you're still standing. Lead? You stepped into the Null Void without a second thought, just to make your father happy. Win? Aren't you the one with dozens of statues around your planet, and a holiday dedicated to your heroics? You're not afraid of battle, you're afraid of having others depend on you."
―Danny Fenton and Ben Tennyson[src]

During his first few years of being a hero, Danny had trouble with both controlling his Ghost powers and trying to live a normal life as a teenager. Danny would often question if his powers were either a blessing or a curse, caused from constantly having to save his home from the threat of Ghost from the Ghost Zone and also needing to keep his identity a secret. However, he always put himself last when the situation called for it and faced each threat that came his way without hesitation.

Since retiring from ghost fighting for years, Danny has become much more reserved and grounded. He is more focused on his family and friends than the fate of the world, but still has humanity's best interests at heart.

After unlocking his Awakening Form, he has surpassed all of his previous weaknesses.

"When I was fourteen, I was in this sort of accident that gave me ghost powers. With them, I saved the whole world. But then, I grew up."
―Danny Fenton[src]

From the moment he was born, Daniel "Danny" Fenton has had to deal with ghost-obsessed parents , Jack and Maddie Fenton, as well as his overbearing sister, Jazz , both of which have negatively impacted his life as much as they have positively impacted it, though generally he became distant from his sister and his mother. Due to these factors, Danny initially had difficulty making friends growing up, generally mocked by the people who knew of his family and their quirks. He took little interest in ghost-hunting and instead preferred researching and dreaming about space, hoping to become an astronaut when he was old enough. Later on he met a fellow social outcast- the "technogeek" Tucker Foley, followed by the "ultra-recyclo-vegetarian" Sam Manson in Amity Park

In his teenage years, Danny was convinced by Sam to investigate his family's malfunctioning Fenton Portal, a device designed to pierce the natural barrier between the "Real World" and the "Ghost Zone". Upon entering the interior, Danny mistakenly pressed the "On" button on the side wall, inadvertently activating the portal while still inside it. This violently infused his DNA with ectoplasm, transforming him into a "halfa"- a hybrid of human and ghost DNA.

For the first month following the accident, Danny struggled to maintain control over his newfound powers, often causing his pants to turn intangible and fall down (usually in public), among other incidents that sent his already low standing on the social ladder at high school and beyond further down than ever before. Danny found himself wanting to inform his parents of the situation- presumably in the hopes of a cure- but never found the right opportunity to talk to them about it.

Despite this, Danny would soon find a reason to keep hold of his abilities while keeping them secret from his family. With the Ghost Portal active, ghosts from the Ghost Zone went through the portal for a variety of reasons- the majority of which involved harm to the residents of Amity Park where Danny lived. Due to his friend Sam's efforts to change the cafeteria's menu to an all-vegetarian selection, the Lunch Lady Ghost arrived and attempted to set things back the way they were through violent means, coming into conflict with a combat-inexperienced Danny. However through trial and error, Danny managed to defeat the Lunch Lady Ghost, seal her away in his family's Fenton Thermos and subsequently discover his new calling- unofficially becoming Amity Park's defender against anything and anyone who would threaten it.

Early in his career Danny "Phantom" was neither a particularly well-known or well-regarded individual amongst the people of Amity Park; exploits were limited to small-scale battles with rogue ghosts who attacked minor people, never obtaining public attention. Danny struggled to maintain what counted as his social life with his self-appointed heroic duties, usually resulting in both inconveniencing the other and bringing his public image as low as seemingly possible. However events only grew worse when Walker- one of Danny's recurring foes with a considerable grudge against him- personally went out of his way to ruin Danny's reputation in the eyes of the people.

Even with these setbacks, Danny continued to fight for good, mastering new powers, making new allies and even more powerful enemies. One fateful trip to Wisconsin led Danny to meet Vlad Masters- an old friend of his family... but now secretly a villain after a lab accident, very much like the one Danny himself suffered, had changed the man into a halfa himself. However whereas Danny used his powers to defend the innocent, Vlad manipulated those around him to amass an incredible fortune and recklessly pursue his personal goals.

Though Vlad offered Danny the chance to train with him should he renounce his father whom Vlad blames for the accident that changed him, Danny immediately refused, resulting in a bitter rivalry between the hybrids. Danny continued to train himself with his friends, discover new abilities to contend with more dangerous foes and truly grow into the hero he wanted to be. With the growth of his willpower and skill came the growth of his character- he learned to appreciate his family's eccentric personalities and stop caring so much about what others thought of him, while in turn learning to stop putting so much pressure on himself to fit in through the superficial concepts his high school peers obsessed over.

After so many adventures and defeating so many ghostly foes- including his own evil future self- the day came when Danny and Vlad had their final battle... or so it appeared. Vlad hoped to break Danny's spirit by creating his own team of ghost-hunters, a group dubbed the "Master's Blasters" to make him appear obsolete. Danny's will was finally broken when his continued defiance resulted in his parents being attacked and nearly arrested by the Master's Blasters, forcing Danny to reflect on his purpose in life and ultimately deciding that his powers were not worth keeping around, so he went back into the Fenton Portal to activate on himself again and seemingly strip him of his powers.

Vlad's greed gave Danny a reason to return to the fight; a massive asteroid composed of the unique anti-ghost material "Ecto-Ranium" threatened to the destroy the planet. Attempting to capitalize on the event, Vlad revealed his secret identity to the world and forced the world leaders to meet his demands if they wanted everyone to live. However Vlad's hubris led him to concoct this scheme before he knew of the asteroid's composition, resulting in his efforts being for naught and bringing the world that much closer to devastation. Tucker came up with an alternate method to save Earth from the "Disasteroid" which required the help of every known ghost in the Ghost Zone, so Danny quickly rounded them up by force. Their attempts to eliminate him only resulted in the latent ectoplasm still within Danny's body to re-energize, returning Danny Phantom back to the forefront. He convinced the ghosts that saving Earth was in their best interests as both the Real World and the Ghost Zone were cosmically intertwined, and as such the destruction of one realm would end with the destruction of the other.

By channeling their powers through a colossal machine that spanned the entire planet, Earth itself was rendered intangible and allowed the Disasteroid to pass through the planet without fanfare, thus saving both realms from annihilation. With his own secret outed to the world, Danny's name was known across the world and himself recognized as the savior of the planet- statues were erected in his likeness and a holiday made in his honor. Even his best friend Sam- having already grown much closer to Danny ever since he obtained his ghost powers and became a hero- opened up to him and they became a couple. Life was finally perfect for Danny so he retired from superhero work for five years to settle down and think about his future, only to be dragged back into conflict with the reappearance of Vlad, and a sinister plot that threatens the Multiverse.

The 5 Years Later wiki has a collection of images and media related to Danny Fenton.
Community content is available under CC-BY-SA unless otherwise noted.
Advertisement