Demonsion is the Omnitrix's DNA sample of a Tieflinite from the destroyed planet Azrifael in the Andromeda Galaxy in 5 Years Later.

11-year-old Demonsion is a small, hunched over demon-like alien with yellow and brown skin. He has two horns and a crest on his head, with only an upper jaw and set of sharp teeth. He has small arms and legs with hooves. Demonsion has a bladed tail that resembles the shape of a scythe. The Omnitrix symbol is located on his stomach.

21-year-old Demonsion is taller and has a slim body with longer limbs and tail. His head looks very similar to his younger version. He is dressed in a black suit with green and gray stripes. He wears black gloves on his hands. The Omnitrix symbol rests on the left side of his chest. 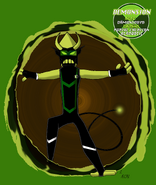