Diamondhead is the Omnitrix's DNA sample of a Petrosapien from the planet Petropia in 5 Years Later.

Diamondhead is a crystalline humanoid alien with light green-blue skin and green eyes, with two protruding crystal spikes off his back. He wears a bodysuit with a black and green shirt and white pants. 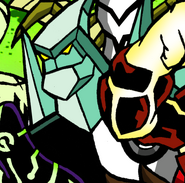 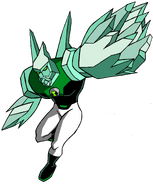