Disk Jockey is the Omnitrix's DNA sample of a Sanavox from the planet Sonorosia in 5 Years Later.

Disk Jockey is completely made out of vibrations, and he uses these vibrations to create a black stereotypical alien form. Disk Jockey is in a robotic suit that is several times larger than his body, the suit is separated into two green and black parts. The suit has a large, transparent chamber surrounded with silver parts with green glowing diodes. The hands are separated by rings of energy that connect to the main body.

The Omnitrix symbol is located on top of the chamber. 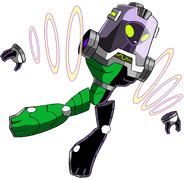 The Sanavox are bio-mechanical beings that are created when lightning strikes, pushing the ionized frequencies into discarded tech layered all over the planet. They spend their time wandering the desolate surface of the planet for other Sanavox. When they find others, they create settlements in the ruins of the former inhabitants of the planet, the Olimaran.