Ditto is the Omnitrix's DNA sample of a Splixson from the planet Hathor in 5 Years Later.

Ditto is a small, rubbery alien. He has three fins protruding from the top of his head and both sides of his face. His body is covered in a black, green, and white color scheme with three nodes on his stomach.

The Omnitrix symbol is located on his left hand. 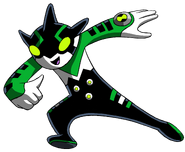