Echo Echo is the Omnitrix's DNA sample of a Sonorosian from the planet Sonorosia in 5 Years Later.

Echo Echo is a small humanoid like alien. He has a circular head, white and black skin, green eyes and mouth, and has two ears that resemble a speaker with cords connected to his body. His arms are directly connected to the speakers. He wears white boots and black armbands. Underneath the suit, Echo Echo is made up of stabilized energy carried by sound waves.

Ultimate Echo Echo's appearance looks much more mechanical than in his normal form. He is a slender humanoid with blue skin with several patterns of black lines, several speakers around his body.

His Ultimatrix symbol is located on his chest. 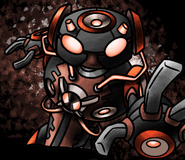 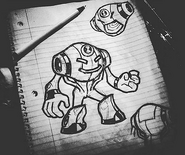 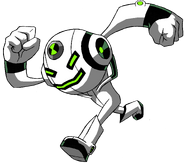 The Sonorosians are bipedal silicon-based biomechanical beings that were created and manufactured by the Olimarans. Overtime, they evolved sentience and when the planet began to die, fled underground where they've created building sites, waiting for their masters to return.