Elimigator is an anthropomorphic alligator with armored green scales all over his body and claws on his hands and feet. He has a tan abdomen, with cracks all over it. Elimigator has a long tail covered in scales and spikes. He wears black and green shorts with white kneepads.

The Omnitrix symbol is located on a strap on his left bicep. 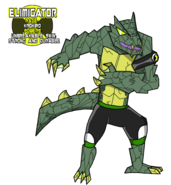 The Krokiro are known for being an incredibly strong-willed yet laid back race. They spend most of their time fishing for food in their swamps or wrestling bigger animals and even themselves for fun. They are more on the defense when they swim underwater for their tough, scaly hide softens in the water, but their massive strength makes up for that. So to avoid having to always swim, they crafted boats made out of the planet’s resources.