"Let's cut to the chase, I don't do private shows for cheap. How about I make you pay with your lives?"
―Ember[src]

Ember McLain is a villain in 5 Years Later. She first appeared in Chapter 8: Risen. She is a Ghost from the Ghost Zone.

Ember's lower half of her body is cybernetic, with her legs, lower torso and spine being comprised of robotics. She possesses horns on her head along with flaming blue hair. 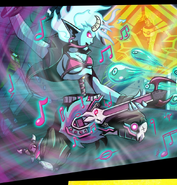