5 Years later Wiki
Register
Don't have an account?
Sign In
Advertisement
in: Characters, Under Development, Ben 10 Universe,
and 3 more

Divinity, formerly known as Eon, is the main antagonist in 5 Years Later. He first appeared in Chapter 2: The Lonely Ghost. He is a Chronian from the planet Concordia. As of Chapter 8: Risen, Eon had evolved into an Ultimate Chronian.

Eon has a humanoid body. In the past, he had warm, yellow skin, grey eyes, and black hair. He wore a leather tunic and a purple scarf from his homeworld.

Before his death, Eon developed a system where he captures and stores an unknown number of Alternative Ben Tennysons, and forces them to transform into a Chronian to transfer his consciousness into, essentially gaining immortality via endless body-swapping. Upon each new body, he adjusts the Chronian transformation to resemble his original self.

When his body starts to decay due to prolonged use of his powers, his skin becomes greyish and damaged. His hair will fall out as well.

Until Chapter 9, Eon wore a long, black suit with purple stripes and a helmet with semi-transparent visor. The suit was made of multiple types of fabrics and metals, all working to preserve Eon's power. On his left arm is a gauntlet that protects his now-corrupted Omnitrix from his current Ben Tennyson body. He wears a matching gauntlet on the right.

After successfully evolving himself using the Godmaker, Eon's physical appearance drastically changes. He has more pronounced yellow skin. His muscle structure changes entirely, with his feet becoming small and stubby, due to him always floating, never again walking. He has four horns on his head with long light-pink hair that shifts into his older, darker hair at the ends. His left eye is entirely purple, with a yellow eye and orange pupil on his right. From his left eye, are purple time scars going down to his wrist, which is now has a black and silver Omnitrix in place of his hand. He has evolved beyond the need for food, sleep, and is now genderless, but still uses He/Him pronouns.

Now declaring himself as Divinity, he wears elegant black and purple robe, with silver armor on his shoulders, wrists, and chest. He has a white cape and a black belt with Chronian writing. He wears his purple scarf that he's kept since Concordia wrapped around his time-scarred arm. His hair is wrapped in three bands, ending in two purple beads. 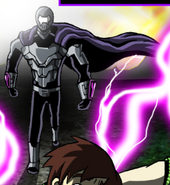 Eon After Many Rejuvenations 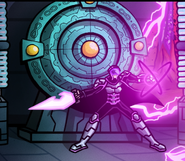 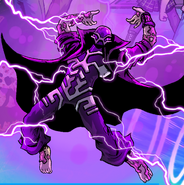 "My apologies, I can't hear you over your soul slipping away at my hands. Now learn your place."
―Eon[src]

Eon's personality has varied through his seemingly-infinite journeys through the multiverse. However, it has mellowed out to be calm, collective, and intimidating.

Eon is not inherently evil. He has a high regard for himself and his race, believing them to have the right to do as they please since they have put in the effort to learn and adapt to their intelligence and power.

Eon has been on a journey for 4,000 Years to free his people from a universe that is collapsing in on itself. His race has the ability to break the laws of the universe but in doing so they caused their own destruction. Eon wants a way to use his abilities without losing his life in the process. He made it his goal to design a device to evolve his body so it can withstand the repercussions of bending time and space. But to do that he needed help. He founded The Alliance to bring his vision to life.

After Chapter 8: Risen, Eon achieved his dream and became a new being he calls Divinity.

In Chapter 9: Time Out, a time traveler reveals that Divinity will create an empire for an as of yet unknown purpose.

"I can do many things with knowledge far beyond your comprehension. I am what some refer to as a Time Walker. I can go anywhere at any point in time I want, in any reality."
―Eon[src]

As a Time Walker

"You may be my wild card Vlad Masters, but don't think I don't know how to shuffle."
―Eon[src]

"The strain of this power was not meant for mortals such as ourselves. As we pulled from the nectars of the universe, they pulled back at us. Every breach in time, every shift in reality, it wore our bodies down, making us weak and frail."
―Eon[src]

'Eon' was a name given to him by the people of Concordia when he volunteered to be the one to travel through the Hands of Armageddon and find their race a new home. His real name is currently unknown. He was a young, gifted Chronian, who kept a purple scarf with him wherever he went.

The Destruction of Concordia

"They needed someone young, fresh, and fearless. I was chosen to be their messiah. My name is Eon. This is my story."
―Eon[src]

Eon's people were masters of breaking the laws of physics, they could shape time and space as they pleased. As they pulled from the nectars of the universe, the universe pulled back at them. Every breach in time, every shift in reality, it wore their bodies down, made them weak, and frail. It lead to their universe collapsing. They needed to find a new home.

In studies though the cosmos, the Chronian people discovered The Hands of Armageddon, an artifact said to exists simultaneously in every dimension. But one more leap through time and space would be fatal for a single Chronian. The Chronians all agreed to offer a fraction of their remaining power. Uniting them all to bear the pain as one.

The Chronian people chose Eon to be their messiah. He was young, fresh, and fearless. They sent him through a rift to find the new universe's version of The Hands, and power it from the other side to bring them all to a new utopia.

Eon found Ben's Multiverse during his 4,000-year journey to free his people. However, after countless leaps though reality, his body grew weaker and weaker. He could no longer power The Hands from the other side. Through his voyage across the multiverse, he learned of the Omnitrix, a device that Eon predicted could create a new Chronian to replace himself in his travels.

Eon battled Ben Tennyson countless times, attempting to get him to become a Chronian. With every failure, he would go back in time and try again. This nearly cost Eon his life. Until one try, it finally worked. Eon transformed Ben Tennyson into a Chronian. Eon augmented his soul into Ben's body, and was reborn anew. To ensure that Ben didn't take control over the body, Eon broke the Omnitrix so he can never transform. However, this solution to Eon's problem would be only temporary as this new body would one day fall too.

Every time his body would reach its limits, he would go to a new universe and obtain another Ben Tennyson. Eon made himself a base where he would keep Ben Tennysons he collected in advance. Some he used them as slaves. Others he used for experiments. Eon's fate became so intertwined with Ben that he started to believe he was Ben Tennyson.

The Creation of the Godmaker

The 5 Years Later wiki has a collection of images and media related to Eon.
Community content is available under CC-BY-SA unless otherwise noted.
Advertisement