"If it's Vilgax, and we all somehow survive, I'm laying eggs in your stomach."
―Eve[src]

Krys'yva, or Eve, is a hero in 5 Years Later. She first appeared in Chapter 2: The Lonely Ghost. She is of an unknown species from an unknown planet in the Ben 10 Universe.

Eve is an average-sized humanoid alien. She has purple-gray skin, four violet eyes, and short ginger hair. She has pale-yellow antennae and mandibles, and deep-purple lips. She has two fingers on each hand, and short arms with a small torso. 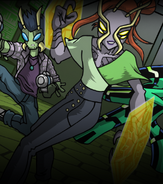 Eve is a sweet and overall timid individual, but likes to speak her mind. However, in times of danger she is very brave, not afraid to step up and risk her life for others. She has a close connection with Chirp and is the only one who can translate his speech.

Her real name, Krys'yva, is impossible to pronounce by those not native to her species, as it involves making different timed and pitched chirping sounds by special vibrational chords. She chose the name “Eve” because it was the first female name she learned of when studying about Earth culture, and she thought it was pretty.