Feedback is the Omnitrix's DNA sample of a Conductoid from the Teslavorr Nebula in 5 Years Later.

Feedback is a lanky bipedal alien. He has one green eye with a dark green vertical pupil. His body is green and black. He has two tentacles resembling power cords on his shoulders with large plugs on the ends and a long black tail. He has golden battery bolt-like appendages on his forearms, hips, and shoulders, and has hollow battery-like fingers. He also has pointed feet. 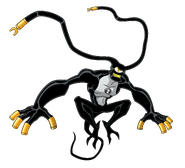 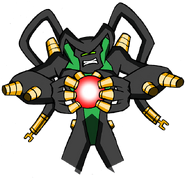 "There's too much energy to absorb. I'm gonna eject it upwards."
―Feedback[src]