Forecaster is the Omnitrix's DNA sample of a Perfect Cumulujinn from the planet Orkoroaysis in 5 Years Later.

Forecaster is a humanoid alien that resembles a Genie. He has light blue skin with tattoos on various parts of his body. He has four red crystals on his body, one on his forehead and three on his armor. He wears green and gold wrist braces and black, green, and golden armor on his stomach.

The Omnitrix symbol is located at the bottom left of his armor. 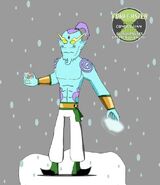 Forecaster's species and home planet are divided by social classes based on one or more elements they control. In Forecaster's case, he is a Perfect Cumulujinn as he can control all aspects of the weather.