GIR is the insane, hyperactive robotic sidekick of Zim. He's the closest thing the incompetent Irken has to a friend, having been constructed from scrap parts and given to Zim by the Almighty Tallest just before it was handed to Zim, instead of a regular SIR (Standard-issue Information Retrieval Unit).

GIR is a small robot, with levitating body legs and blue orbs and a silver body. He has a levitating cylindrical head and an antenna on top of it. His eyes, chest, and are a light blue color. 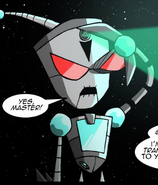 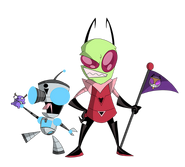 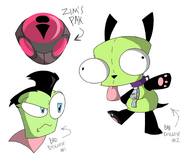 GIR is happy-go-lucky, enthusiastic, energetic, excitable, and extremely hyperactive. GIR will eat just about anything, regardless of whether it is edible or not. Most of the time he spouts nonsense, but does have a few, short moments of clarity. Every so often, GIR will display brief instances of complete functionality. Usually triggered by Zim giving an order, this “Duty Mode” is made manifest by the cyan parts of GIR's body and eyes flashing red, his voice changing from high-pitched to harsh, deep and rough, and GIR himself snapping to attention, alert and utterly obedient.