Chapter 1: Alienated
Ghost Portals are a form of transportation in the Danny Phantom Universe. As the name implies, they are portals that serve as a gateway between Earth and the Ghost Zone. With specific modifications, ghost portals can serve as pathways to other dimensions as well.

The Ghost Portal works by opening a dimensional rift to the Ghost Zone, which can then access other dimensions if the user wishes to go that far. The energy released from a Ghost Portal can bind ghost-like properties to human DNA if direct contact is made.

This is the one seen in 5 Years Later. It is located in Fenton Works and was created by Danny's father. Danny's father started the work onto the portal to give it the ability to open pathways to other dimensions. He later gave up on it and Danny finished his work. It served as Danny's way to gain access to the Null Void. This led to him meeting Ben for the first time.

This Ghost Portal was created by Vladco. It's briefly seen in Chapter 2. It works the same as the Fenton Works Ghost Portal.

Plumber Base Ghost Portal began development in Chapter 2: The Lonely Ghost and was developed by Blukic and Driba, it was completed later on by Cooper in Chapter 8: Risen, and was used by him and the Orion Squad to get to Ben, Danny, Gwen, and Kevin to inform them about the machine the Alliance built and prevent it from activating.

The University of Wisconsin-Madison

This was the Prototype of the Ghost Portal developed by Jack Fenton, Maddie Fenton and Vlad Masters on the campus of The University of Wisconsin-Madison using artificial ecto purifier and various components and scrap from nearby junkyards. On April 17th, 1984 during an attempt to activate it the machine malfunctioned which led to the accident which gave Vlad Masters Ecto-acne and after that his ghost-like abilities. 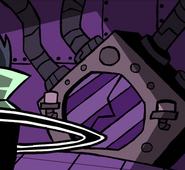 Creation of the Prototype

The miniature prototype of the Ghost Portal was created and developed by Jack Fenton, Maddie Fenton and Vlad Masters at the university of Wisconsin-Madison.

The first Ghost Portal malfunctioned during the attempt to activate on April 17th, 1984, due to Jack Fenton's mistake. The machine blasted ecto-energy into Vlad's Masters face who was looking into the machine, which caused him to develop Ecto-acne on his face.

The prototype Ghost Portal was decommissioned and was later used as the base for the new Ghost Portal.

Years after the first Ghost Portal Jack Fenton and Maddie Fenton created and developed the new and improved Ghost Portal, which was large enough for a human to enter it and teleport into the Ghost Zone.

At first the new Ghost Portal seemed to not function at all which caused Jack and Maddie to both quit working on it. However unknowingly to them their son Danny Fenton put on a laboratory suit and walk into the portal. While inside of the machine, Danny pressed the activation button placed inside by accident, which caused it to activate. The Portals activation merged Danny's DNA with ecto-energy transforming him into a hybrid of a human and a ghost which gave him ghost like abilities.

Years later, Jack proposed the idea that the Ghost Portal could access more than one dimension, however he gave up on the further development of the machine. Danny decided to work on the portal himself which eventually lead him to discover a different kind of energy and connect the Portal with a different dimension, the Null Void.