Ghostfreak is the Omnitrix's DNA sample of an Ectonurite from the planet Anur Phaetos in the Anur System in 5 Years Later.

Ghostfreak is a ghost-like alien. He has pale white skin and black cracks over his body. He has a single green eye. The bottom of a tail can be seen coming out of his skin. He has sharp claws on each of his fingers.

The Omnitrix symbol is located on one of his tentacles and can be seen in a crack on his left pec. 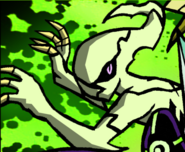