GoTro is a hero in 5 Years Later. He first appeared in Chapter 2: The Lonely Ghost. He is a Galvanic Mechamorph from the moon of Galvan Prime, Galvan B in the Ben 10 Universe.

GoTro is a short, broad Galvanic Mechamorph. His body is mint green while his head, arms, and legs are very dark blue. The stripes on his head, arms and legs are neon green. He wears a plumber suit that covers his legs to his chest. 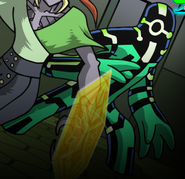 Prior to the events of 5 Years Later, GoTro was a smart-mouthed slacker. Due to training at the plumber academy, he has lost his lazy nature (mostly), but still has that smart-Alec tone to him. He is skilled with computers and other similar technology.

Community content is available under CC-BY-SA unless otherwise noted.