Goop is the Omnitrix's DNA sample of a Polymorph from planet Viscosia in 5 Years Later.

Goop is a mass of green goo. He can change shape at will via his anti-gravity projector. His most common form is a humanoid shape, but he can alter it in a variety of ways due to his lack of a skeletal structure. His gravity projector is silver, black, and green. Usually, it floats above him to stabilize his form.

The Omnitrix symbol is located on top of his Anti-Gravity Projector. 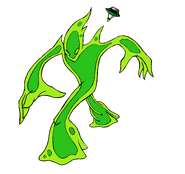 Goop in Flashback of Chapter 10: Again