Gremlynx is the Omnitrix DNA sample of a Tanzro from the planet Dragard located outside of the Local Group in 5 Years Later.

Gremlynx is a humanoid transformation that resembles a mix between a tiger and a dragon. He has brown fur with blue stripes across his body with gray and silver armor plating on his chest with dark grey straps. He has further armor plating on his wrist and shins. He has a long and heavily armored tail. His face resembles a feline cat with large, bat-like ears and fur that goes out like hair. He wears black pants with green and white stripes and patterns.

The Omnitrix symbol is located on his shoulder. 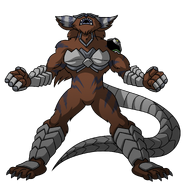 Heralding from the incredibly large planet of Dragard in the far North Eastern Regions of the planet, are the Tanzro, one of the many intelligent species who call Dragard home. The Tanzro themselves, having evolved from a beast that once roamed the Ice Tundra's during Dragards Ice Age, have given them many questionable adaptations such as having venom purposely seeping into their blood streams to use as a coolant. The Tanzro rule the North Eastern reaches of the planet as the second most technologically advanced species on the planet.

Due to the large size of their planet, Tanzro's rarely ever run into other species that share their skies, but do occasionally encounter another species within their genus that are a more brutish and simple people from the warmer regions of the planet. The Tanzro can be a bit of a belligerent species, having evolved they way they did makes them always boiling for a challenge. This brutal nature is rather unappreciated by many of the other intelligent species found on the planet but despite this, the Tanzro are able to show restraint when encountering a non-competitive being.

As for now, the Tanzro species still seek to conquer the great challenge that is their planet. Many young Tanzro's will set out, trying to map out and encounter all the different peoples and landscapes of their planet. They even hope to reach the skies, mapping out the different floating islands that are for now out of their reach.