Grey Matter is the Omnitrix's DNA sample of a Galvan from the planet Galvan Prime in 5 Years Later.

Grey Matter is a small, frog-like humanoid with gray skin and big green eyes. Grey Matter wears a green, white, and black chest plate attached to a bodysuit down to the thighs with green and black gloves, as well as black strappings.

The Omnitrix symbol is located on his back. 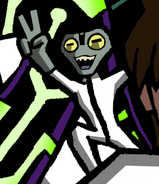 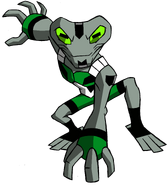