Gunstinger is the Omnitrix's DNA sample of an Arid Parachna Scorpiones from the planet Eqitan located outside of the Local Group in 5 Years Later.

Gunstinger, is an insectoid transformation that resembles a scorpion. He has orange, red, and brown skin and exoskeleton plating. He has two red, orange, and brown claws with a node for firing his stingers, as well as an orange and brown appendage on his crown. He has lightly colored spikes on the sides of his head and on the back of his claws. He has three long, scorpion-like legs and a green, black, and white uniform.

The Omnitrix symbol is located on his belly. 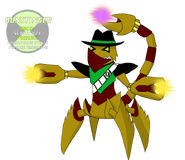