Gut Buster is a heavy set, muscular humanoid with lumpy red skin. He has a small head with a flat top and small eyes. His torso is bulky with a giant grinning toothy mouth taking up most of the front. He has muscular arms with proportionately small hands. His shoulders have two sets of conical nodes (one set of which has metallic rings by its base) while his elbow has just one node each. His legs have large elephantine feet, they connect into the torso and tail. 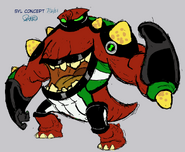 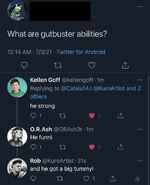