Charm of Luck
Charm of Telekinesis
Spellbook
Staff of Ages

"One binding spell outta do it."
―Chapter 8: Risen

Gwendolyn Catherine Tennyson, commonly known as Gwen Tennyson in her teenage years and childhood, is a character in 5 Years Later who first appeared in Chapter 2: The Lonely Ghost. She is the cousin of Ben Tennyson and the girlfriend of Kevin Levin.

In her Human form, Gwendolyn has red hair, green eyes, and Caucasian skin. She has a slim and athletic body. She has worn many different outfits throughout 5 Years Later.

In her Sorceress form, her skin turns purple, while her hair grows in length and glows a bright pink and white glow. She wears her Lucky Girl costume in this form.

In her Anodite form, Gwen's body becomes a dark purple construct of pure mana. Her hair becomes a stream of glowing pink energy, which grows longer than normal, reaching her feet. Gwen loses a majority of her externally visible facial features such as a nose or ear and does not wear any clothing in this form. In this form, her skin gives off a purple glow. 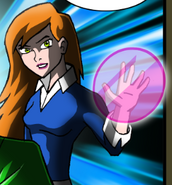 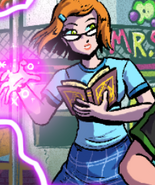 Even when she was 10, Gwendolyn was intelligent and mature for her age, but at the same time, she was stubborn and smart-mouthed when it came to talking with Ben. Her quick thinking and good instincts gave her an edge in dealing with dangerous situations. She's sometimes too trusting of people who would want to exploit her goodwill, leading her (or others) into harm's way.

As she got older, she became even more mature, as well as more caring and sympathetic. She grew a tight bond with Ben as well.

Gwendolyn is willing to forgive villains for their wrongdoings (the most notable being Kevin) if she believes they've changed for the better. Although her intelligence and knowledge have only increased, she's not completely free of her naiveté and can be arrogant at times as well.

Despite being far more mature and reasonable than Ben and Kevin, Gwendolyn is somewhat hotheaded and can lose control of her Mana if angered enough.

"She's been studying the mystic arts for over a decade now."
―Ben Tennyson[src]

Gwendolyn has since retired her Lucky Girl persona shortly before her teaching career began. During Gwendolyn's Senior Year of College, her identity was exposed to the entire campus in a battle with Darkstar. The student body was impressed and incredibly pleased to find it was one of their own students who was protecting the campus this entire time, and the campus offered her a position as Head Professor of Mystical Mythology. She's currently starting her second year of teaching.