Haunted Host is a character in 5 Years Later. She is a Ghost from the Ghost Zone in the Danny Phantom Universe.

Haunted Host is a titanic Ghost that takes the appearance of a samurai fox with black helmet, gray chest piece and shoulder pads with a red outline with the opening in the chest showing the red kanji for fox on her green ecto body. Gray and black wrist guards with red armor pieces covering her claw like hands. Her lower half divides into tendrils with the tip trapped within towers that have a hole at the top with green flames shooting out.

Haunted Host has a house mode which resembles that of a warped Japanese castle.

Haunted Host can project an avatar to speak with to those who enter her castle form. It takes the form of an older lady with traits of a fox-like ears in her black hair and claw feet and hands. Her green coat forms into tendril representing nine tails of a fox. 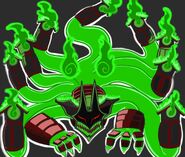 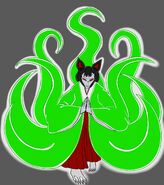 Haunted Host due to being shy in her old life now as a ghost she keeps to herself in her house from trying to draw as little to no attention as possible. If someone stumbles into her house, she will ask you to leave or die, and she’s more than willing to kill you if you don’t heed her command.

Kurenai of the Inari family was the sheltered daughter of nobles from the Heian Period of Japan, working their entire lives to earn their wealth. They came to own the largest castle in Japan through their blood, sweat and tears, but even at the height of their status, they could not escape their impoverished roots. Kurenai was born with a disease that once afflicted her father, but the effects were far more severe, effectively destroying her immune system, leaving her bedridden permanently. Any foreign bacteria could prove to be life-threatening, so she could never leave her home. And so, she never did. She lived her entire life sheltered from the outside world, only able to enjoy what was within the castle walls. Even after her parents passed away, she lived in solitude, which led to onlookers to believe she was some sort of Onryō (vengeful spirit) that haunted the Inari household. The myth lasted until the superstitious youth felt the need to play the hero, and destroy the evil spirit forever by setting fire to the Inari Castle. Even as the flames ravaged her home, Kurenai could not bring herself to leave, and so she perished in the flames. In death, her soul took on the form of a fox-like castle; for what was she if not an extension of her own home?