Heatblast is the Omnitrix's DNA sample of a Pyronite from the planet Pyros in 5 Years Later.

Heatblast is a burning hot humanoid alien with plates of heated rock covering his torso, arms, and face. His body is made of incredibly hot plasma energy. His uniform consists of specialized black, white, and green leggings. His feet have a slight oval-like design with only two toes and one back toe. 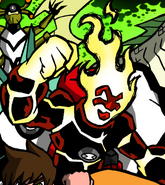