Hexaposs is a six-limbed possum-like alien with lavender-colored, fluffy fur. Along the head are several whisker-like hairs distributed randomly among the fur. His fingers and tail lack fur and are pink in coloration. Hexaposs has green eyes and two ears, one of which has an extra ear lobe. 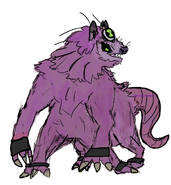 Luna Cimmera is a peaceful world orbiting a gas giant. Its surface is pot-marked with small, dense forests among its planet wide prairies. In these forests live Didefisapients, a kind people that live in large troops. Their arboreal lifestyle let them move across the branches and trunks of these trees almost carefree due to the lack of predators. Didefisapients help their homes grow by dropping seeds to the forest floor.

Didefisapients have recently developed complex language and basic tools such as crutches, saddles for their young to ride in and rope based contraptions. Luna Cimmera is recognized by the interstellar community as one to avoid interfering with. To this day, the Didefisapients are unaware of what is beyond their planet.