Horas is a series of robots created by the Plumbers. He debuted in the first episode of Ink Tank's "And Beyond" series.

Horas are robots with light blue eyes and blue, black, and silver body. They have four robotic tentacle-like arms and a built-in Multiversal Portal Projector in their chest.

Horas V04 is the first Horas to have a distinct look, with damage done to the left side of his head from his time on Methanos. 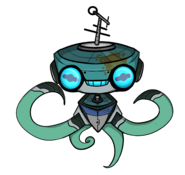 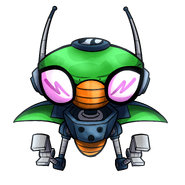 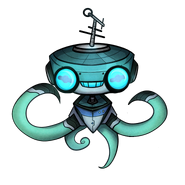 Horas is always trying to be chipper and optimistic about most situations he is in. Although he can also be scared easily by others. He likes to make jokes, and thinks of himself as very humorous.

Created by The Plumbers after the discovery of reaching other dimensions through the Null Void, which was proven possible when Ben Tennyson was forcibly transported to the Generator Rex Universe by the entity known as Alpha. Horas were built for the purpose of cataloging planets and species as far as he can reach in order to educate for the betterment and experience of knowledge.