Humungousaur is a large, dinosaur humanoid. He has light and dark brown skin, with brown plating on his wrists, quads, and knuckles. He has additional yellow plating on his chest down to his waist. He has a tail that extends up his back and into his spine, with four spikes protruding from the back of his tail.

When in his giant form, he grows a thicker skin, along with gaining more pronounced plating and extra spikes. 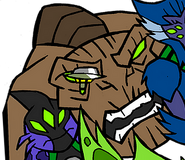 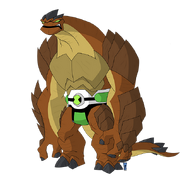 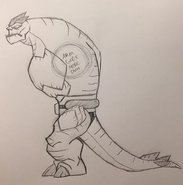 Humungousaur is a Vaxasaurian from the planet Terradino. They are in the middle of the caste system and live on the surface of the planet. They live very primitive, stone-age lifestyles and live in small villages where they spend most of their days roughhousing and building spires for the dominant species of the planet, the Pturbosaurians.