This is the universe that Invader Zim originates from in 5 Years Later. It first appeared in Chapter 4: The Fallen Gods.

Endless cities and suburbs cover a large portion of the planet, and skyscrapers such as Professor Membrane's lab contain vast metallic labyrinths. Zim has attempted to take control of his Earth many times, but has failed in nearly every attempt thanks in large part to the efforts of his nemesis, Dib. There is an expansive desert known as the Keshawn Desert somewhere on this Earth as well. 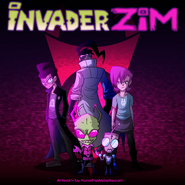