Doctor Jackson Stephan Fenton, or Jack for short, is a Character in 5 Years Later. He first appeared in Chapter 1: Alienated. He is a human from the planet Earth in the Danny Phantom Universe. He is now retired from Ghost Hunting.

Jack is a large and bulky man, with black hair that is starting to turn grey, and blue eyes. He wears an orange and black zip-up jumpsuit with several pockets, along with black gloves and boots. 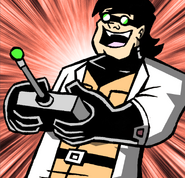 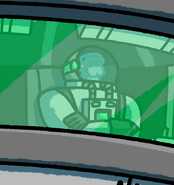 Jack Fenton is often described as incompetent, as he can be fooled easily. Before the Disasteroid struck, he was obsessed with ghost hunting, but after ghost hunting became obsolete, he focused on cross-dimensional travel. After he couldn't figure it out, his personality changed, and he appears to have become an alcoholic.

Jack's personality has been shown to be hard to determine, while he has shown intelligence far beyond what a normal Human man, or even compared to Multiversal scientist like Azmuth, he has also been shown to act rather childish or even foolish the other.

When he was young, he began his studies at the University Of Wisconsion-Madison in 1984, with his fellow lab assistant, Vladamir Silver Masters, and his future wife, Madison Holly Payne. Jack created the first Ghost Portal out of artificial Ecto-Purifier and scrap from the local Junk yards, resulting in a early and somewhat unstable attempt at Ghost Zone travel. On their first attempt to use the prototype Ghost Portal, the calculations for the device were wrong and the machine was unstable. This resulted in Jack's friend Vlad to be blasted in the face with Ecto-Energy, infecting him with Ghost Achene and later on turning him into a ghost hybrid.

Vlad was soon forced into extreme medical care for years, while Jack had felt an extreme amount of guilt for his friend's condition.

The two friends didn't speak to each other for years after that, and sometime after Jack and Maddie got married.

Jack and his now wife Maddie later started a company together, dedicated to developing ghost hunting technology, called Fenton Works. They later had two kids together, Jazz and Danny Fenton.

After the events of the Disasteroid, Jack had become an icon to many parts of the Earth for his Ghost Tech. He had started working with governments around the world, supplying them with Fenton tech and Ghost catching gear to help defend the globe from Ghost attacks. This had made him very wealthy from the high demand, and with so many new officers and agents capturing and defending against ghost Jack had entered into retirement from Ghost Hunting.