Jetray is a manta ray-like alien with a red and yellow body. His wing flaps stretch down to his tail. He has four antennas protruding from his face. He wears black shorts and shoulder pads.

The Omnitrix symbol is located on his right shoulder. 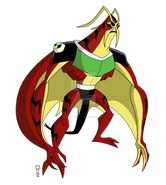