Jump Kick is the EVO fusion of Walkatrout, Grey Matter, Eye Guy, Molestache, Pesky Dust, The Worst, Crashhopper and Prick that Fallout Ben was transformed into during Chapter 7: Fold.

Jump Kick is a desaturated blue fish with two Orange and Blue eyes of differing sizes, he is in possession of fins, Ears and Hair of Argit's Species, a Molestache's mustache, and a tail that ends with the wings of Pesky Dust. Out of his body come out 2 green legs taken from Crashhopper. The uniform surrounds his tail. His modified Omnitrix symbol is on his chest. 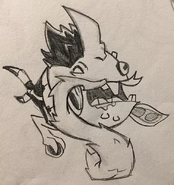 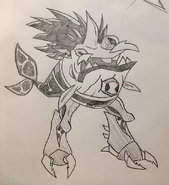