"Are you forgetting how we met? You’re the king of power stacking."
"Yeah, but now when I do it, I still look good."
―Ben Tennyson and Kevin Levin[src]

Kevin Ethan Levin is a Hero in 5 Years Later from the Ben 10 Universe.

He first appeared in a flashback in Chapter 2: The Lonely Ghost. He is a half Osmosian, half Human hybrid.

Kevin is a tall and athletic caucasian human. He has black hair, black eyes, and greyish, pale skin. An X-shaped scar rests on his chin. Kevin's physical appearance often changes depending on what he absorbs or what power he's using at the time.

After absorbing a broken blade, screw, a piece of Shishiana's skin, and an Arburian Pelarota's tooth at the end of Chapter 7: Fold, Kevin mutated into a fusion of these materials and the DNA samples. Kevin's black hair is now longer and ends with Shishiana's appendages in some places. His skin is now pink, he has two horns on his forehead and his ears are now pointy. His eyes are completely black with yellow iris and black pupils. His right arm is made out of metal and metallic elements with a long blade stick out of it. His left arm is a mix of Arburian Pelarota and Shishina DNA with black appendages as its fingers. 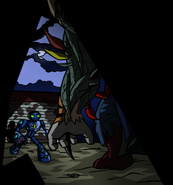 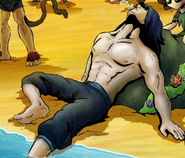 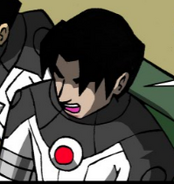 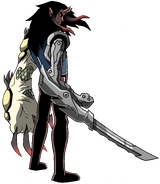 After having a rough childhood, Kevin has become an upstanding citizen and hero with the support of his friends and family. He generally acts sensible, kind, and caring for others. He generally likes to act tough but is a softie at heart. Despite this, he can still act cynical and like a delinquent.

He greatly dislikes those who take advantage of others and after having his mind manipulated by the likes of Vilgax, Servantis, Aggregor, and his own inability to control his powers in his youth, Kevin is firmly straight-edge, as he does not wish for his mind to be influenced any more, even recreationally with alcohol.