Kraving is the Omnitrix's DNA sample of a Kramao Felim from the planet Kampuriant in the Andromeda Galaxy in 5 Years Later.

Kraving is a short, feminine humanoid cat with blue fur with darker blue accents. His head is detached from his body, pulling a piece of his spine and his purple blood veins with it. Multiple purple veins protrude out of his head and shoulders as well, and with one above the legs resembling a tail.

The Omnitrix symbol is located on a pauldron on his chest. 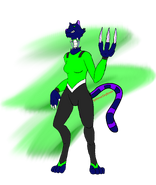 The planet of Kampuriant resides in the Andromeda Galaxy, and only has one large landmass where mos of its residents reside. Kampuriant is warm for half the year and tropical for the other half, having monsoons determine their change in season. The Kampuriant mainland is mostly plains and forest, but has one big lake in the middle that it’s residents gather at for celebrations.

The predator of most of the planet’s residents, the Rahunters, live in the ocean that surrounds them. Despite proof saying otherwise, there are some forest areas that residents refuse to go near, saying they feel the stare of their predators when they walk nearby.

The Kramao Felim are a one of the many dominant species found on the planet Kampuriant, and are often found in hunter roles, looking for enough meat to help feed themselves and everyone else.

Ben unlocked this form when he had managed to earn the respect of the Kramao Felim representative for helping defend a village from Rahunters.