"Keep it Fizzy!"
―A phrase commonly said at the end of his videos and announcements

Robert Daniel Orpilla, more commonly known online as Kuro the Artist or Kuro for short, is an illustrator, animator, writer, and filmographer. He is best known as the creator of the webcomic 5 Years Later.

Kuro is a 5'11" Hispanic-Caucasian. He has dark brown hair and brown eyes. 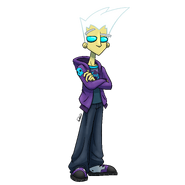 Kuro's passion for art is the driving force behind his lifestyle.

He likes to be very social and interactive with his audience but dislikes constantly being interviewed.

He graduated from High School and has completed one year of college before dropping out to focus more on his art.

His Facebook Page, Kuro the Artist, officially launched on January 12th, 2015, which was the first step towards his career.

On April 24th, 2019, the Kuro the Artist YouTube Channel was officially renamed to The Ink Tank.

Kuro first met Hurshie through YouTube in 2007. They've collaborated on numerous projects since. Hurshie eventually became Kuro's manager and co-founded the Ink Tank with him in June 2018.