Lodestar is the Omnitrix's DNA sample of a Biosovortian from an unknown planet in 5 Years Later.

Lodestar has a floating, metallic head with a green light coming out of it, two golden horns which have a small, silver ball floating between them and a silver, black and green mask.

Lodestar has a brown body, with yellow, metallic stripe patterns all over it. He has two large arcs in place of shoulders with his head in between them. He has spikes where many joints reside and his hands look like magnets, acting very similarly to crab claws in movement.

His suit is very isometric, reassembling his stripes. The suit is green with a white border surrounding it, and black stripes wrapping around him. 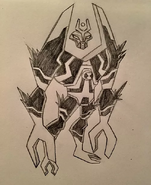