The Orion Squad
The Plumbers

Captain Lula is a Plumber in 5 Years Later and the leader of The Orion Squad. She first appeared in Chapter 2: The Lonely Ghost. She is a Citrakayah from the planet Chalybeas in the Ben 10 Universe.

Lula is a feline-like alien with yellow eyes. She has light and dark purple fur around her body. Along with a blue mark on her forehead, she also has a triangular nose. She wears a standard issue of the Plumber's uniform. 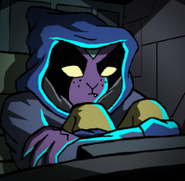 "She cares too much about trying to prove herself to make a clear-minded decision."
―Ben Tennyson[src]

Lula has been shown to exhibit good leadership qualities, as she is Captain of the Orion Squad. However, she is also shown to put her gut feelings over direct orders at times, showing she still has room to grow as a leader. Lula holds a deep insecurity over her speed, due to the Citrakayah race often being considered inferior to the Kinecelerans.

Lula was born on the planet Chalybeas, living an uneventful life. Due to the rivalry between the Citrakayah race and the Kinecelerans, Lula grew a deep insecurity that she would be unable to exceed her potential. Lula often listened to broadcasts chronicling the adventures of Ben Tennyson, who she admired as a hero. During a mission, Ben was required to quickly evacuate a planet and instead of choosing to transform into his perceived to be faster Kineceleran form, he selected his Citrakayahian transformation, Fasttrack, being able to evacuate the planet in time, proving the Citrakayahian's worth to the galaxy. Being inspired by his actions, Lula's confidence in her own abilities grew, and she enrolled into the Plumbers. She eventually was assigned to join The Orion Squad, due to impressing Ben Tennyson with her dedication and skills.